Given (and perhaps because of) the backdrop of continued financial challenges, and unprecedented levels of political antagonism toward the media, here are three thematic areas where local journalism in the Pacific Northwest is continuing to evolve. 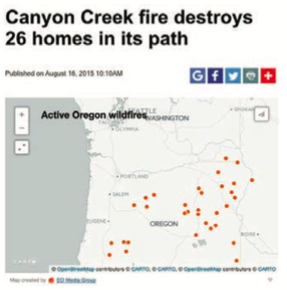 The digital revolution has created new opportunities by allowing media outlets to branch out to other platforms.

Papers like the Medford Mail Tribune (Medford, Oregon) now have verticals for local video content as standard, the Daily Astorian (Astoria, Oregon) and others have their own YouTube channels, and photo galleries, maps, graphics, and data visualizations are increasingly part of the portfolio of content offered by local media outlets.

Clark Talks, the Vancouver Columbian (Washington) newspaper’s weekly podcast, offers an insight into news and topics from across Clark County.

It is hosted by reporters Dameon Pesanti and Katie Gillespie with appearances from their Columbian colleagues. Recent episodes have explored the Affordable Care Act, school funding, the centennial of the Interstate Bridge, and some of the town’s newest breweries.

GeekWire, which offers “tech news, commentary, and other nerdiness covering Microsoft, Amazon, Google, Apple, Internet, startups, mobile, geek culture, [and] more,” is another local provider with an audio outlet. The weekly GeekWire Podcast airs at 8 p.m. Saturdays and 1 p.m. Sundays on KIRO Radio (97.3 FM) in the Seattle region and reaches a potentially global audience as a podcast distributed via iTunes, SoundCloud, and Stitcher.

Meanwhile, on a smaller scale, the Cottage Grove Sentinel (Oregon) partners with local radio station KNND 1400 AM to air a once-a-month talk show.

For one hour on the second Tuesday of the month, we chat
about the news in the community, and community members
can call in with questions. The radio station doesn’t quite reach Eugene [the nearest city 22.5 miles away], but it’s a must-listen for the older demographic in town.

For those who are already plugged into social media and may be a bit younger, we’ve begun streaming these shows on Facebook Live.

In this regard, although they have fewer resources than their larger counterparts, local media outlets are embracing some of the opportunities for multimedia journalism, going beyond their traditional platforms to nd new ways to engage with audiences and distribute content.

Experimentation with New and Revitalized Formats

As multimedia journalism is now successful embedded in local newsrooms as well as their larger counterparts, it’s interesting to see how outlets in the Pacific Northwest are also innovating with new, established, and emerging storytelling formats.

Two of the oldest digital delivery channels are newsletters and podcasts. Neither are new, but both are enjoying a resurgence.

Selection of newsletters offered by the Oregonian

The Oregonian (Portland, Oregon), just one Pacific Northwest outlet with a healthy range of newsletters, has a mixture of 15 daily and weekly email publications covering everything from sports to opinion, watchdog reporting, and a monthly newsletter, “The Real Dope,” featuring the best of the paper’s marijuana coverage. (Audiences must confirm they are over 21 to subscribe to the monthly marijuana newsletter.)

Podcasting, another old product, is also reaching new audiences, buoyed by “the Serial effect” and the increasing ease with which audiences can listen to this content.

The podcasting format allows for flexibility, in terms of duration and frequency, that a standard radio show does not. Many newsrooms and media outlets are embracing this creative and journalistic freedom.

OPB, for example, launched a weekly podcast in 2016, “This Land is Our Land,” to cover the federal trial following the 2016 armed occupation of the Malheur National Wildlife Refuge.

As OPB’s website notes: “The podcast provided trial recaps, in-depth analysis, and insight into the high-stakes proceedings, as well as the larger political and cultural issues at play.”

With 12 primary episodes and a number of shorter updates, their podcast is an example of how this storytelling platform can be used for deep dives into important topics with a specific shelf life, as well as long-running and ongoing series. 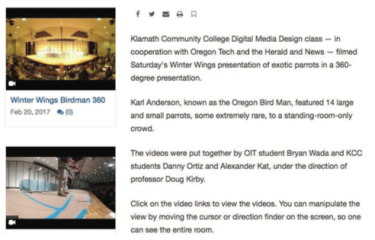 Along with augmented and virtual reality, 360 video is one of a series of emerging visual formats that journalists and newsrooms are experimenting with around the globe.

The Klamath Falls Herald and News (Oregon) is just one outlet that has been experimenting with both AR and 360 video content.

Using 360 video, the paper has recently covered sports, the 30th Annual Restoration Celebration in Chilloquin, and a show featuring 14 exotic parrots at the 2017 Winter Wings Festival. Several of these e orts were produced by the Digital Media Design students of Klamath Community College, then published by the Herald and News.

Talking about their early experiences with the format, Managing Editor Gerry O’Brien says, “It’s been fun. It’s a learning experience, a learning curve, and it’s a little clunky at first. But once you kind of get it down, it gets easier as we go on.”

Interestingly, given the relatively nascent nature of 360 imagery on social media, each piece comes with instructions for the audience explaining how to access the material. For example, the videos for the “Oregon Bird Man” (published in February 2017), which are embedded in the left sidebar of the paper’s website, contain clear directions for use.

Meanwhile, a story celebrating the 30th anniversary of Klamath Restoration Act by Congress in 1986—a move “which restored the tribes’ condition as a sovereign nation”—contains links to a 360 video show by Klamath Community College students at an event in Chilloquin.

Providing this type of guidance is important, recommends Caitlyn May, editor of the Cottage Grove Sentinel, as “digital advances are cool but are ineffective if your audience doesn’t know how to log on to Facebook [or other tools].”

“Likewise, if there’s a growing desire from your audience to ‘learn’ social media, help them,” she suggests. “Add content to the web in easy-to-use formats. Reader-friendly [as a concept] should expand beyond the newspaper page and onto every platform we use to distribute these stories.”

In addition to these efforts with 360 video, the paper— which is published six days a week and has a circulation of more than 12,000 58—has partnered with Klamath Community College to produce regular augmented reality content.

This is an extract from a new report on the evolution of local journalism in the Pacific Northwest, published by the Agora Journalism Center at the University of Oregon.

One response to “The evolution of local journalism”