Last year CSV worked with BBC Video Nation as part of the Volunteer Britain project (which I led on – see the original press release here).

Video Nation made five new films after we helped them to source some great volunteer stories:

Fun Raising by Paul Parkes – Paul has managed to get a cancer charity onto the agenda for students at the University where he works. He says despite their image of not wanting to part with their cash, the students he meets are generous and are up for everything .. Even the Full Monty!

New Friends by Benson Obetan – Benson wants other people to know just how much you can get out of being a volunteer and helping other people.

New Leaf by Paul Williams – Paul really appreciates the chance to put something back into the community by working in a local park. It’s a stark contrast to the time he spends in his prison cell.

Mum’s the Word by Shazia Aslam – Shazia has been volunteering at a community centre in Burnley for four years. She helps new mums from local Muslim communities and is keen to encourage them to breastfeed their babies. Her enthusiasm for volunteering led her to train full time as a nurse, and now she’s juggling her time between training, volunteering and her family.

Volunteer by Brad Hassell – Brad is a volunteer. He talks about how being a volunteer has its rewards, and how it makes you see life in a different way.

Content could be viewed on the BBC Video Nation website, or via BBCi Your Stories (behind the red button on DTV).  We also used relevant stories from the VN archive too. All of this content is currently on the Video Nation pages of the Volunteer Britain archive. 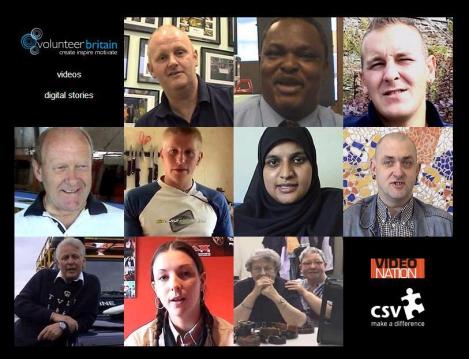